We had fun with the alpaca folk in Canberra, and some curious

visitors who were new to alpaca. Like Bizzy Lizzy, who enjoyed

touching the fleece on the suris and huacayas. Click the link to see more pics. 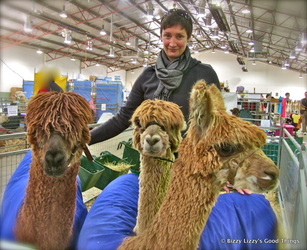 
With the privilege of having Rito Huayta from Peru to judge our animals, the show went off with a bang! Thanks to Dianne Marshall for offering to take 3 juniors for me, and to Jenn Errey for helping in the show ring. We had some great results:


We were happy to see Colourbration in Victorian Central Region back to its original best. Thanks to the organisers for all their excellent work.


Thanks to Keryn and her team for managing the complexities of this show. We rolled up the Hume with a team of 4.


2018 saw the return of this event: National Alpaca Show combined with the Colourbration Show originally from Victorian Central Region.


We were excited to have the chance to come back to this show after 8 years- back for the colour!  A big thanks to the organisers. Solstice is for sale as a stud male to bring his genetics to your herd. Now at an affordable price of $9000. Offers or payment plans considered. As he is a good worker, shared ownership is also an option.